Tell us what you're looking for...
Want to Run Your Own
My Guide Website?
Find Out More

Adventure Editorial Family Fun Lifestyle Mini Break
This is a small Caribbean island, separated from the mainland by a lagoon, which is a natural sanctuary for a variety of animals and birds, including flamingos and pelicans. The island is almost unspoilt, there is tranquillity and blissful laziness. From the perspective of a colourful hammock, you can contemplate the turquoise sea, white sand, tall palm trees and the unhurried life of the islanders. Here you will have a break from the chaotic Mexican city traffic, as there are no cars on Holbox, and the only means of transport are melexes and mopeds. Between June and September, a whale shark comes to the vicinity of the island, giving you the opportunity to meet this giant on a diving trip. Wading among the shallow lagoon within the Yum Balam reserve, you may come across relict species of horsetail. Holbox Island is undoubtedly an eldorado for those fascinated by the underwater world. 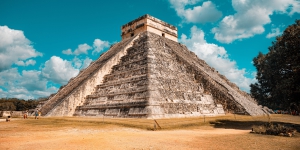 How do you get to Holbox Island?
From dawn to dusk, ferries run every half hour or so from the marina in the town of Chiquilá in north-eastern Yucatán to get to Isla Holbox. The journey takes just about twenty minutes. Alternatively, for those with more flair and a richer wallet, there are small Cessna planes operated by a local airline, with connections from Playa del Carmen and Cancún and landing at the tiny local airport on Holbox Island.

What is there to see on Holbox Island?
The lack of cars certainly contributes to the island's distinctive, informal atmosphere, which is conducive to relaxing on the beautiful beaches, snorkelling in the warm sea in the company of whale sharks and turtles and unhurried strolls. A great alternative to strolling and admiring the colourful street art is to cycle outside the tiny centre. To cool down, it is also worth visiting one of the numerous beach clubs and enjoying the local drinks, not necessarily alcoholic, and the delicacies of the always fresh seafood. Keen anglers can hire boats from the locals and try their hand at the local fish in the sea and lagoons. One of the island's attractions is also the phenomenon of plankton bioluminescence, which is best observed during the period when plankton-eating whale sharks appear around the island, roughly from May to early August. 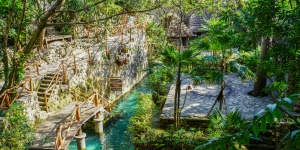 Playa Holbox
The soft sand, crystal-clear, turquoise and fairly shallow waters here tempt you with their idyllic beauty and are somewhat synonymous with paradisiacal relaxation and excellent beachcombing. Among the local beaches, Playa Holbox is the largest and probably the best known, as well as the most popular among visitors to the island, although you are unlikely to see unbridled crowds. The beach is guarded, has a gentle shoreline and is an ideal place to relax, including with children. It is also a great place for kite and windsurfers. Sunbathed in the Caribbean breeze, you can enjoy a meal in the nearby restaurants offering fresh, natural products that the Yucatan is rich in, or watch the sunset with a drink in your hand.

Yum Balam
Meaning 'Lord Jaguar' in Mayan languages - no surprise as the region is home to as many as five species of wild cats, now threatened with extinction - the area has been a nature reserve since the 1990s. It was created to resist the growing tourist industry around Cancun, especially the construction of new resorts, and to preserve the natural beauty of the landscape, the flora and fauna, and the peculiarities of the area. The reserve covers 154,000 hectares in the Conil mangrove lagoon, as well as Holbox Island. The surrounding waters are abundant with dolphins and whale sharks, and large areas of wetlands and rainforest provide a unique ecosystem. A whole range of waterfowl can be viewed at specially designated observation posts. From April to October every year, some 45,000 pink flamingos visit Isla Pajaros, and their peeping is quite exciting. 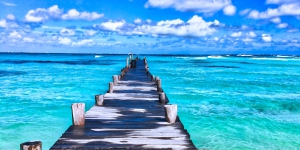 Punta Mosquito
From the centre of Holbox, this vast wild shoal can be reached on foot in about an hour. The shallow water surrounding the site allows for passage, but the current tides must always be taken into account. Here you must remember that you are in a wildlife sanctuary and visiting should be done with respect for the wildlife. In particular, flocks of wild flamingos and a whole range of other birds take a liking to Punta Mosquito. The flamingos are here in quite large numbers from April to October, and watching them in their natural habitat will certainly be one of the extraordinary holiday memories you will return to.

Swimming with whale sharks
Is it safe to swim with sharks? Sure you can! And already the waters around Holbox are just perfect for this kind of activity, especially as you are dealing with one of the gentlest marine animals. Despite their enormous size, these sharks feed on plankton and pose no threat to humans. Swimming with these giants, weighing 20 tonnes each and measuring 16 metres in length, is an unforgettable experience that is remembered and recounted for years. Many people come here specifically to experience this unusual form of communing with wildlife in the turquoise waters of the Caribbean Sea.

Cuisine on Holbox - Mexican street food - what's worth eating on your trip?
Almost everyone has tried one of the dishes of Mexican cuisine, associated with beans, corn and chilli. However, this cuisine, which combines the culinary traditions of the indigenous Indian population and the cuisine of the conquistadors, can surprise many with its variety of flavours, smells, colours and textures, and its richness, especially here in the Yucatán, is truly immense.

When visiting Isla Holbox, it is worth sampling a variety of dishes made from the fresh produce offered by the Caribbean Sea surrounding the island; a whole range of tropical fruits or cocoa sweets. Whether you choose a restaurant or one of the street food stalls spread throughout the town, you will not regret it. For coffee, be sure to try the marquesita, a Yucatan speciality reminiscent of our custard tubes, or the crunchy outside and soft inside of churros with chocolate sauce. Near the small airport, you'll find a local market and a huge selection of exotic and unique fruits for a ridiculously low price. If your hunger is greater, try the cochinita pibil, a marinated meat wrapped in banana leaves and then baked, which originates from the Yucatán, or the tacos, empanadas or quesadillas, which offer a variety of fillings and spices.

And finally, a word about seafood. If you think warmly of grilled, fried, marinated or smoked fish, shrimp or lobster, you will become a true seafood lover once you have tasted it here on Holbox Island! Freshly caught, seasoned in a thousand and one ways, served in a flirtatious way, they are sure to please lovers of more than just Mexican cuisine, and the Isla Holbox lobster pizza will become legendary.